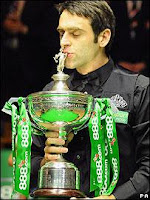 Last night I watched Ronnie O’Sullivan win the World Snooker Championship for the third time. Not a vintage performance (that came in the semi-final against Hendry) but enough to prevail over Ali Carter. Both players appeared drained by seventeen days of this stuff.

I’ve been following this game since my teens. I love watching good players on TV and from time to time I try to play. It’s actually incredibly difficult and makes you realise just how talented and dedicated the professionals are.

It also strikes me that this quaint English game undperpins many key coaching principles:

Performance is all in the mind

There are very few external variables in snooker. No wind, rain, mud, heat, etc that bedvil outdoor sportspeople. There is little crowd noise, the table is perfectly flat and when you’re at the table there is little your opponent can do to influence what you do.

At a professional level, the players all have astonishing skill levels. What separates the winners and losers is surely their mental toughness; their ability to focus on sending the cue through in a straight line to hit a white ball where intended with the required strength. Do this as well as you can about 10000 times and you could be World Champion.

The top players play with incredible awareness. They spot problems not set to occur for another half a dozen shots, they play to avoid landing in a position that would mean using the rest and they send balls safe once in a winning position. They are also aware of their opponent’s mental state and know when to apply pressure or when to keep things tight. Even whilst trapped in their seats while their opponent scores heavily, the top players are incredibly focused on the game, monitoring every nuance.

Snooker is the ultimate example of self-responsibility: the ball ends up exactly where the player hit it. No one else is to blame, no one else is involved. This is pure self-realised feedback of a kind we can only dream of in a work situation.

It’s good to look at lessons we can learn at work from other situations. What other sports can teach us about managing people?